History
“Koh Samui” (Samui Island) - This name has been known among ancient boatmen for a long time. “Khwan Fa”, a stone axe used to hunt animals with during the Stone Age, was found here leading us to believe that human beings had been living on this island during that period. The most important archaeological evidence was found in 1977 and 2000 in the area of Wat Talingpung and Lamai: A kind of prehistoric drum (“Glong Mahoratung Sumrid”), dating back to the Stone Age, which is now kept at Chaiya National Museum in Suratthani. Archeologists assume that people on Koh Samui traded with people from the mainland before recorded history, exchanging coconuts and seafood with goods from the mainland. The Glong Mahoratug drum is considered to be a part of the Dong Son culture that has its origins at the Songma River in Northern Vietnam. A boat delivering souls is painted on the drum. In the boat are a bird and 5 or 6 half bird, half man creatures with their heads decorated with feathers. This type of boat is believed to have been made from some kind of grass, similar to the first grass boats seen in Egyptian paintings. The drum was popular in Southeast Asia. It has also been found in Vietnam, Cambodia, Laos and Burma, and on several islands in the South of Thailand.

The discovery of archaeological sea resources show that Samui islanders had traded with people from near and far since the Ayutthaya era. An ancient fishing boat with a flat body carrying potteries was found sunk in the ocean half way between Koh Samui and Koh Tan. Cooking pots, jugs, cooking ovens, originating from the town of Srisatchanalai and Mai Nam Noi (north of Bangkok) were found in the boat. There was also porcelain and celadon from China, bronze-coated utensils from the Ayutthaya era, and short rounded stone tables.

This discovery suggests that the boat sailed around Southeast Asia. Coconuts were also found on the boat which could have been either provisions or goods or both. It is very possible that coconuts may have been a major part of the cargo carried in the boat. It is likely that the boat had sailed from a port north of the Gulf of Thailand and stopped at Koh Samui to load up and then it headed south to Nakorn Si Thammarat or Pattalung. However it sank before completing the trip, around the 23rd Buddhist Century (18th century) just before the end of the Ayutthaya era.

‘Chomdao’ and ‘Chomduean’, simply translated mean ‘Looking for the Stars’ and ‘Looking for the Moon’. These two magnificent Thai Suites are steeped in history, culture and custom. Just spending a few nights in this unique, beautifully restored, Ayutthayan Style Thai house will give you an insight into the true meaning of Thai tradition and culture.

The Chomdao and Chomduean Thai Suites each have a separate bedroom and living room. In the living room, an outsized abstract painting in red and gold contrasts beautifully with the dark teak walls, tastefully illuminated by carefully positioned wall and floor lamps.

A foulard with ancient pictorial art decorates the bedrooms teak-wood walls. The antique tester-bed was previously displayed at the Bang-Pa-In Royal Palace, in the former Thai capital of Ayutthaya.

The bathroom is tiled in sandstone with a specially designed ‘salty egg’ shaped hand basin. The paintings on the bathroom doors are done by a local artist from Maenam in the Ayutthayan period style and are perfect examples of traditional Thai artistry. The detail shown represents a stalk of rice as well as various animals, symbolising the abundance of nature in Thailand.
A sliding glass door in combination with a large terrace provides ventilation and offers relief from the hot and humid climate.
During their daily rounds our housekeeping team, supervised by Khun Rin, takes special care of all our hotel guests needs. All toiletries and linens are changed daily.
Room Facilities
Air Conditioning
Mini Bar
Bath Robe and Slippers
Safety Deposit Box
Tea and Coffee Making Facilities
Hot Water
IDD Phone
Satellite TV
Hair Dryer 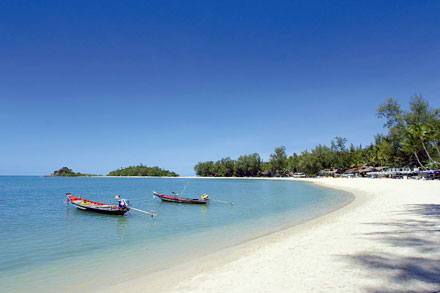 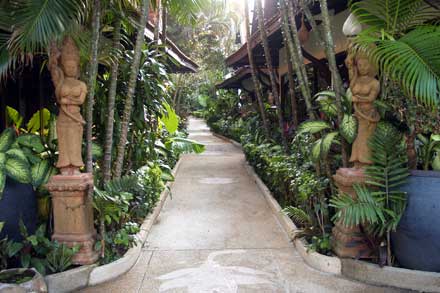 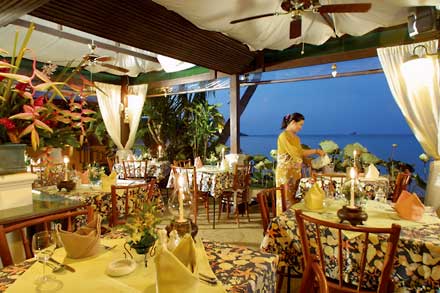 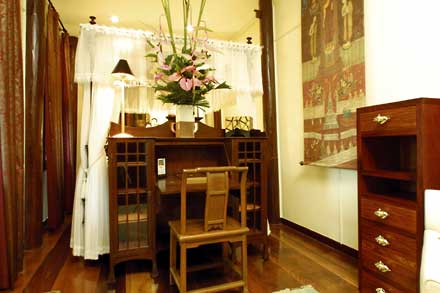 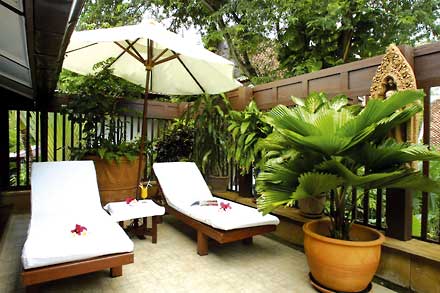 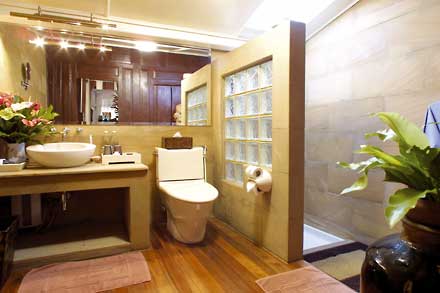 when i small i hv visited there le…very nice ^^